GET YOURSELF OFF TO A GREAT START

ROG Maximus XII Hero is the perfect foundation to the Republic of Gamers. It’s a gaming motherboard that packs substantial power, smart cooling and faster memory support under a stealthy skin. Loaded with renowned ROG features, from AI overclocking and AI cooling to attention-grabbing Aura Sync illumination, Maximus XII Hero is ready to perform and crafted for customisation.

Ensures a snug and reliable connection to the EPS 12V power lines.

The VRM has 16 power stages, each rated to handle 70 amps.

Each Power stage is accompanied by a high-permeability alloy-core choke rated to handle 45 amps.

Input and output filtering is provided by solid-polymer capacitors rated to last thousands of hours at high operating temperatures.

Enjoy comprehensive control over fans and water pumps, via either Fan Expert 4 or our UEFI. Whether you’re cooling with air or water, Auto-Tuning mode intelligently configures all parameters with a single click. There’s also an Extreme Quiet mode, which reduces all fan speeds to below the default minimum — keeping your system whisper-quiet when performing light tasks.

Each header can be set to monitor and react to three user-configurable thermal sensors for workload-based cooling. And all settings can be easily managed by Fan Xpert 4 or UEFI.

A VRM heatsink is placed on the MOSFETs and chokes, and the embedded heatpipe connects to the aluminum I/O cover.

The U-shaped design provides rapid and even heat transfer from the VRM to the extended VRM heatsink.​

The M.2 heatsink keeps the M.2 SSD at the optimum operating temperature for consistent performance and reliability.

The high-quality thermal pad improves overall heat transfer from the system by bridging the heat generated by the power stages to the heatsink.

The extended heatsink at the end of heatpipe increases thermal mass to offset the additional heat generated by high power consumption.

Designed to meet the demanding requirements of power users and content creators, 10 Gbps onboard Ethernet provides a new level of home networking. With up to 10X the bandwidth of standard gigabit Ethernet, you’ll enjoy streaming uncompressed 4K UHD videos, and backups and file transfers that are faster than ever before.

The Hero features Intel® Gigabit Ethernet for faster, smoother gaming. Intel Ethernet controllers have a natural synergy with their processors and chipsets, reducing CPU overhead and offering exceptionally high TCP and UDP throughput, so there’s more power for games and other tasks..

Take care of complex tuning with just one click. ASUS 5-Way Optimization is a system-wide tuning utility that overclocks the processor and tunes fan speeds to ensure the best balance between cooling and acoustics. The automated CPU tuning feature of 5-Way Optimization leverages the same on-board intelligence as AI Overclocking, but goes further by running a Prime95 based stress test to deliver a result that’s well-tuned from the beginning.

With the ROG MAXIMUS Series you have comprehensive control over fans via Fan Xpert 4 or the media-acclaimed UEFI. Whether you are cooling with air or water, Auto-Tuning mode intelligently configures all parameters with a single click. Extreme Quiet mode reduces all fan speeds to below the default minimum assuring your system stays whisper-quiet when performing light tasks.

NOT JUST FOR VETERANS

The renowned ASUS UEFI BIOS provides everything you need to configure, tweak and tune your system. It offers intelligently simplified options for PC DIY beginners, as well as comprehensive features for seasoned veterans.

An intuitive Advanced mode offered via the UEFI lets you take complete control. A built-in search feature makes it easy to find options, and various Advanced functions let you intelligently make nuanced adjustments so you can dial in performance just the way you want.

DISPLAY YOUR OWN CUSTOM LOGO

YOUR MOTHERBOARD, YOUR WAY

Gear up with ROG components, from graphics and monitors to mice and keyboards. And up your game with complementary aesthetics, control and compatibility. The ROG ecosystem is more extensive than any competing brand, so enjoy greater choice as your system expands.

Unique design allows the codec’s impedance-sensing function to be ported with either the front or rear headphone outputs. 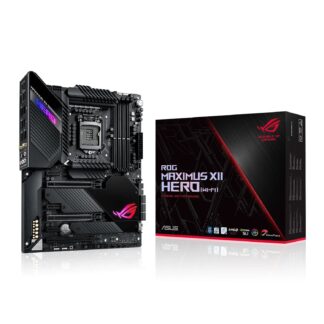