The Ryzen 9 3900 XT is the most advanced AMD desktop processor which has been optimised with higher speeds, more memory and wider bandwidth for use with the new B550 chipset motherboards. AMD Ryzen™ 3000 Series processors have changed the PC industry with award-winning performance for gamers and artists and the 3rd gen XT Series processors feature support for the world’s first PCIe 4.0 ready platform which enable the most advanced graphics, motherboard and storage technologies. The 3900XT has got 12 cores and a huge 24 threads and can reach speeds of up to 4.7 GHz for you to smash through any task you throw at your PC with great capabilities. The X570 and B550 chipset offers amazing features like PCIe 4.0 support as well as CPU and memory overclocking and CPU upgrade support! Boost your PC’s performance with double the multitasking capability.

Please Note: The AMD Ryzen 9 3900XT does not come bundled with a cooler. We recommend an all-in-one liquid cooler with a 280mm radiator (or greater).

SETTING THE BAR FOR ELITE PERFORMANCE 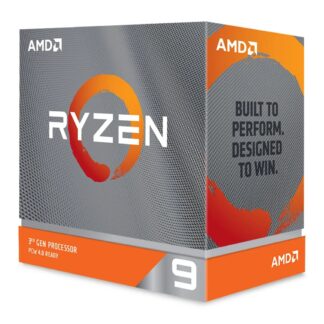