The ASUS Dual GeForce RTX™ 3070 OC has been drastically improved to house the revolutionary new Ampere chips from NVIDIA and to deliver the next generation of gaming performance. The ASUS Dual GeForce RTX™ 3070 OC melds performance and simplicity like no other. Leveraging advanced cooling technologies derived from flagship graphics cards, the Dual opts for substance over style, the perfect choice for a well-balanced build. Buckle up and engage cutting-edge gaming prowess.

An advanced onboard controller brings fans to a standstill if GPU temperatures are below 55°C letting you enjoy light gaming/load in relative silence as load increases and temperatures rise the fans will automatically start up again.

Auto-Extreme Technology is an automated manufacturing process that sets new standards in the industry by allowing all soldering to be completed in a single pass. This reduces thermal strain on components and avoids the use of harsh cleaning chemicals, resulting in less environmental impact, lower manufacturing power consumption, and a more reliable product overall.

The ASUS GPU Tweak II utility takes graphics card tuning to the next level. It allows you to tweak critical parameters including GPU core clocks, memory frequency, and voltage settings, with the option to monitor everything in real-time through a customizable on-screen display. Advanced fan control is also included along with many more features to help you get the most out of your graphics card.

NVIDIA DLSS is groundbreaking AI rendering that boosts frame rates with uncompromised image quality using the dedicated AI processing Tensor Cores on GeForce RTX. This gives you the performance headroom to crank up settings and resolutions for an incredible visual experience. The AI revolution has arrived to gaming.

UP YOUR CREATIVE GAME

Take your creative projects to a new level with GeForce RTX 30 Series GPUs. Delivering AI-acceleration in top creative apps. Backed by the NVIDIA Studio platform of dedicated drivers and exclusive tools. And built to perform in record time. Whether you’re rendering complex 3D scenes, editing 8K video, or livestreaming with the best encoding and image quality, GeForce RTX GPUs give you the performance to create your best.

Live streamers can now level up their game even further with the new NVIDIA Broadcast app. It upgrades any room into a home broadcast studio by transforming standard webcams and microphones into smart devices through the power of AI. The Broadcast app offers three AI-powered features which are: Noise Removal, Virtual Background and Auto frame so the focus always remains on you.

NVIDIA has partnered closely with Microsoft to enable full DXR support on GeForce GPUs. GeForce RTX GPUs were designed from the start for the extreme demands of ray-tracing workloads. Specialised RT cores, found only on GeForce RTX graphics cards, provide billions of rays per second of performance, and up to 3X the frame rates with DXR games and applications. This makes ray tracing at real-time frame rates possible for the first time. 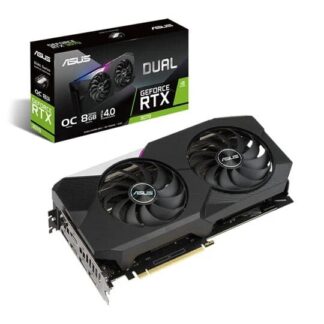