LIQUID-COOLED LEVIATHAN
Deep in ASUS R&D labs, engineers theorized the optimal thermal solution for AMD’s latest RDNA™ 2 Architecture. The beast that emerged is a liquid-cooled leviathan capable of drawing maximum performance out of the new chips, while remaining completely cool and quiet. Performance aficionados in search of the most ferocious RX 6900 XT card have found their game.

CLEVER COMPATIBILITY
The LC utilizes 600mm tubing to enable compatibility with large chassis or builds that feature an AIO CPU cooler. The radiator fan cables can be connected directly to the card and secured with included cable ties to keep everything organized.

AURA SYNC
You won’t find the Strix LC hiding in the shadows. Instead, this denizen of the deep flaunts its power with addressable RGB lighting that shines through striations in the shroud, an illuminated ROG logo, and two ARGB radiator fans.

GPU TWEAK II
The ASUS GPU Tweak II utility takes graphics card tuning to the next level. It allows you to tweak critical parameters including GPU core clocks, memory frequency, and voltage settings, with the option to monitor everything in real-time through a customizable on-screen display. Advanced fan control is also included along with many more features to help you get the most out of your graphics card.

We’ve partnered with wtfast to help you to play free from lag, latency issues, and lost packets. With a 6-month subscription to the wtfast Gamers Private Network, you’ll enjoy lower ping for a smoother, more fluid online gaming experience. Buy an ASUS graphics card – and don’t be left waiting!

XSplit offers a premium streaming experience with in-game annotations and other advanced features. Enjoy a free license with the purchase of select ASUS graphics cards. See you online!

QuantumCloud is a simple and secure service that lets you effortlessly earn extra money by putting your idle GPU to work. Earnings are automatically transferred to your WeChat or PayPal account, and your privacy remains intact because QuantumCloud doesn’t collect your personal data. Get started making money today!

For games that support FidelityFX CAS, turning off Radeon™ Image Sharpening in Radeon™ Software to avoid over-sharpening is recommended. 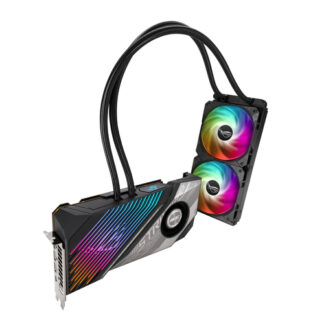