Introducing the Gigabyte GeForce RTX 2060 OC graphics card powered by the award-winning NVIDIA Turing architecture featuring a sleek blacked out frame and protective backplate to ensure it can fit into most system builds; This GPU also features 2x 90mm Unique bladed fans that spin in independent directions, 2x direct touch heatpipes and a 3D active fan this makes up the WindForce cooling System keeping your GPU cool is integral to getting that top-tier performance and longevity that hardcore enthusiasts are searching for.

This revolutionary architecture, combined with our all-new GeForce RTX™ platform, fuses together real-time ray tracing, artificial intelligence, and programmable shading. You’ve never created and enjoyed games like this before.

Gigabytes WindForce system features blades with a triangular blade edge that works to guide air through aerodynamic 3D channels on the blades surface to enhance the airflow giving you a much higher cooling efficiency, these superb 3D active fans also provide semi-passive cooling meaning the fans will only spin up when the GPU is put under high/stressful load, if demand is less the Gigabyte 2060 WindForce 2X runs virtually silent allowing you to use your system with minimal distractions.

LET THE HEAT OUT

WHERE DOES ALL THE HEAT GO? 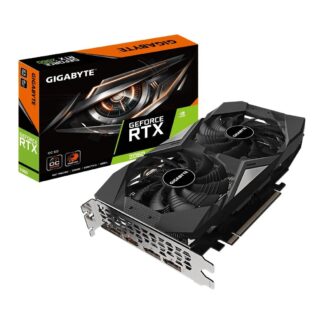