Introducing the ROG Maximus XII Formula, This sublime motherboard has been designed to explore the upper echelons of gaming and overclocking. The Formula is plumbed for custom liquid cooling and includes other enhancements to punctuate premium systems. The CrossChill EK III VRM block, co-developed with EK Water Blocks, help cope with higher VRM loads associated with Intel Comet Lake CPUs. Aesthetically, Maximus XII Formula has a stealthy black finish with intricate patterns cut into its reflective armor. The latest-generation Formula is all set to make your showcase rig shine.

Ensures a snug and reliable connection to the EPS 12V power lines.

The VRM has 16 power stages, each rated to handle 70 amps

Each Power stage is accompanied by a high-permeability alloy-core choke rated to handle 45 amps.

Input and output filtering is provided by solid-polymer capacitors rated to last thousands of hours at high operating temperatures.

Enjoy comprehensive control over fans and water pumps, via either Fan Expert 4 or our UEFI. Whether you’re cooling with air or water, Auto-Tuning mode intelligently configures all parameters with a single click. There’s also an Extreme Quiet mode, which reduces all fan speeds to below the default minimum — keeping your system whisper-quiet when performing light tasks.

Each header can be set to monitor and react to three user-configurable thermal sensors for workload-based cooling. And all settings can be easily managed by Fan Xpert 4 or UEFI.

CrossChill EK III lets you cool with air and water. The redesigned copper cooling channel is wider to provide up to 37.2°C-lower MOSFET temperatures on water, while the standard G1/4″ threaded fittings allow it to fit existing setups for efficient, quiet cooling with minimum effort.

The focus on maximizing performance would be futile without similar dedication to improving the cooling that allows systems to sustain faster speeds. The CrossChill EK III VRM block enables Maximus XII Formula to cope with the high VRM loads of ten core CPUs. The hybrid cooling system sits atop of a heatpipe that’s directly linked to the extended VRM heatsink, giving it cooling capabilities that surpass the requirements of this current generation.

Three M.2 slots are wired directly to the PCH. One slot supports both SATA and PCIe 3.0 x4 modes, while the other two supports PCIe 3.0 x4 for NVMe. Additional Intel® Optane™ memory recognizes, remembers, and speeds up access to most frequently used files, applications, and games for faster, more responsive performance. 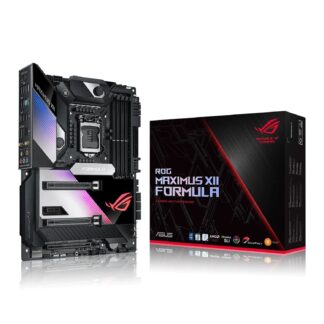