PLAY ALMOST ANYWHERE WITH JUST A VR HEADSET AND CONTROLLERS

Step into the world of VR with the Oculus Quest, an all in one immersive virtual reality system which enables just you and your hands to be plunged into the world of wireless gaming. The Oculus Quest gives you everything you need with plenty of freedom with state of the art optics and built in audio. You can now forget about wires, PC’s and phones as the Quest is ready to play when you are! Four ultra-wide angled sensors map your environment keeping you safe of obstacles. Insight tracking also helps your every move translate into the game you’re playing, combined with oculus touch controllers you will be under complete control of your every move. Feel the power of every gesture as the next level of VR gaming is finally here!

Arm yourself with the award-winning Oculus Touch controllers. Your slashes, throws and grabs appear in VR with intuitive, realistic precision, transporting your hands and gestures directly into the game. Take your first steps into a new world. Oculus insight tracking instantly reflects your movements in VR. Slash through enemy hordes, duck under obstacles and charge into the heart of every experience. Simply set up the device with your Oculus mobile app, and Oculus Quest has everything you need to explore VR out of the box. Suit up and game on.

Grab what you need, toss aside what ou don’t and feel the rumble of every impact. Oculus Touch controllers recreate your hands, their gestures and interactions precisely, so every game is real enough to reach out and touch. Whether you’re at home or somewhere new, Oculus Quest works with your environment. You can play standing or sitting in spaces big or small.

Stop watching games and step into them. Whether you’re dodging spells or slashing through enemy hordes, you’ve never been this close to the action. The visionary Oculus developer community designs every heart-pounding moment with you at the centre of the experience. Explore the universe without tripping over the coffee table.

The Oculus Guardian system is designed to remember the boundaries of your playing space and help you avoid nearby objects while you’re in-game. 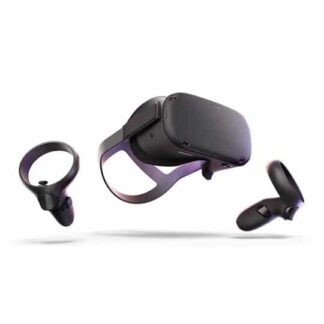