Performance without Compromise
The DWL-6610APE is an affordable, Unified Wireless AC1200 Access Point, enabling businesses of all sizes create the fastest wireless network possible. With a sleek and stylish design, the DWL-6610APE can be discreetly deployed anywhere.

Broadcast on 32 SSIDs Simultaneously
Supports up to 32 SSIDs, 16 per radio, including station isolation.

Smart Design
The DWL-6610APE can be mounted easily onto any wall or ceiling without looking out of place in an office or home. Enclosed in a plenum-rated UL2043 certified housing, the DWL-6610APE adheres to strict fire codes for placement in air passageways.

Band Steering technology
With band steering, the DWL-6610APE detects whether or not the wireless client is dual-band capable, and if so, it pushes the client to connect to the less congested 5 Ghz band. It does this by actively blocking the client’s attempts to associate with the 2.4 Ghz network.

Versatility Built as standard
Whether you intend to use a single Access Point or roll out a large corporate network, the DWL-6610APE coupled with a D-Link Wireless Controller or Unified Switch makes managing your wireless network simple.

Secure and Green Design
The DWL-6610APE has a wireless scheduler feature, which turns off wireless functionality when it isn’t needed, saving power and increasing network security.

Fast Seamless Roaming
Combining the DWL-6610APE with a Unified Wireless Switch or Controller allows you to create a wireless network that enables people to move freely around a building without losing connectivity. 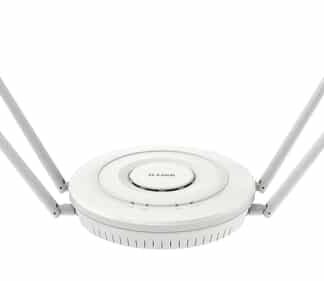