Play It. Save It.
Every Game Drive is designed for Xbox and compatible with Xbox Series X, Xbox Series S, all generations of Xbox One and Game Pass. When you plug in a Game Drive, Game Drive Hub, Game Drive SSD or a Special Edition Game Drive, you have room to build the ultimate gaming library. Archive your new Xbox Series X|S games and play your legacy titles straight from the Game Drive.

Plug and Play
The Game Drive for Xbox and Game Drive SSD are USB 3.2 Gen 1 bus-powered for quick and easy installation and gaming — just plug in and launch into action in under two minutes.

Light It Up
A built-in LED bar illuminates your gaming centre in Xbox green — right out of the box.

On-the-Go Gaming
Take all your games to a friend’s place thanks to the slim, travel-friendly design of Game Drive for Xbox and Game Drive SSD.

However You Want It
Designed to bolster your Xbox’s look, Game Drive Hub for Xbox works both vertically and horizontally.

Let’s Play Now
With the Game Drive for Xbox SSD, you’ll go from downloading to playing in no time, thanks to 1 TB of flash-speed SSD capacity. 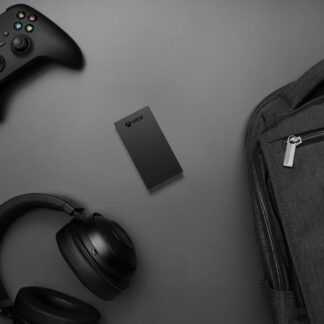